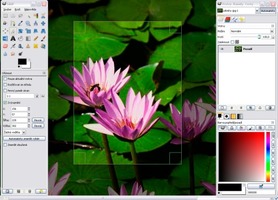 GIMP is a free and open-source raster graphics editor used for image retouching and editing, free-form drawing, resizing, cropping, photo-montages, converting between different image formats, and more specialized tasks. GIMP was originally released as the General Image Manipulation Program. In 1995 Spencer Kimball and Peter Mattis began developing GIMP as a semester-long project at the University of California, Berkeley for the eXperimental Computing Facility. In 1996 GIMP was released as the first publicly available release. In the following year Richard Stallman visited UC Berkeley where Spencer Kimball and Peter Mattis asked if they could change General to GNU . Richard Stallman approved and the definition of the acronym GIMP was changed to be the GNU Image Manipulation Program. This reflected its new existence as being developed as Free Software as a part of the GNU Project.